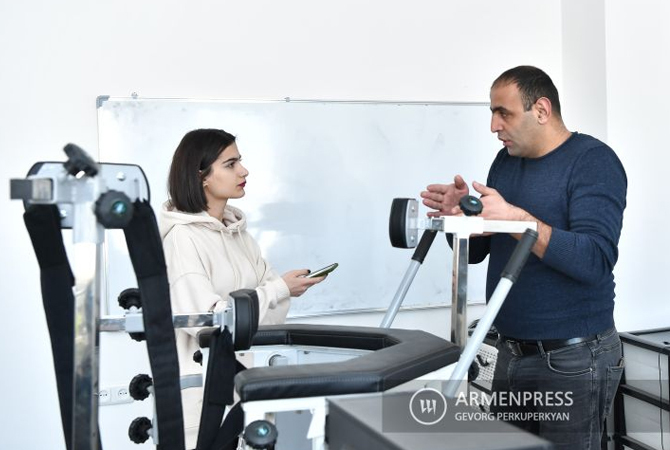 The Armenian QaylTech company has unveiled MetaGait VNR, a new device designed to do a set of rehabilitation exercises in the rehabilitation treatment of craniocerebral injury, as well as other neurodegenerative diseases (cerebral palsy, Parkinson’s disease, Alzheimer’s disease, multiple sclerosis).

Now, in addition to being a walk simulator the device has VR environment, where patients will be able to play various games online and move in virtual reality.

“We have a military veteran with a disability who was unable to keep his pelvis stable. But when we switched on the game he was quickly able to move his pelvis. The persons with disability is going into a different world with this game, where they can walk and do other things that they are unable to do. But this is also a rehabilitation, support and preventive device,” Arsenyan said.

The VR environment offers games such as football, skiing, hockey, tennis and generally other activities requiring walking, for example a walk in the forest. QaylTech also plans to create a global cybersports and cybertourism for persons with disabilities.

MetaGait can be easily used in home settings, which, according to Arsenyan is very important because it prevents or mitigates more than 30 diseases that are developing in people with disabilities.

The production cost of one device requires 2,000,000 drams and QaylTech has launched a fundraiser at ReArmenia platform for their project: 20 devices will be provided individually to military veterans with disabilities, 5 to children’s care facilities and 10 to the Artsakh Rehabilitation Center.

Arsenyan says he expects the government to support him. He said the product has the export potential into the international market.